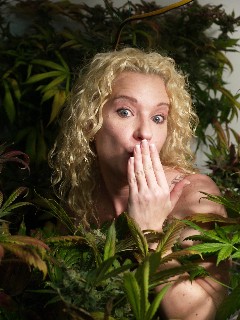 After a very successful banking career lasting over a decade Michelle decided to take the bull by the horns and join the Marijuana Movement when fate caused her path to cross with Marc Emery’s. When he walked into her bank, she took it as a sign and completely exchanged her safe and comfortable life for a hell-ride. Life in the fast lane is an understatement when you know the depths of conviction Michelle had to have to be the catalyst for the day to day affairs of every project and undertaking they did for almost another decade, from elections to the creation of Pot-TV. Now Michelle helps patients fill out the myriad of forms Health Canada requires for each medicinal cannabis user to complete. (When was the last time someone had to fill-out 40 pages of paperwork for a Valium?) Just the task of downloading the correct documents could be a nightmare so when Michelle first filled-out her papers we simply made copies of the correct forms then she took them and made full-sets of forms for anyone who needs them. Then she took it one step further and complied information regarding scientific findings on medicinal cannabis to inform potential patients- doctors with. The response was amazing, first from the potential patients and then from the doctors themselves. Most admitted no knowledge of cannabis. She showed it to her doctor and he congratulated her on her presentation, he was impressed and very supportive.

The information packs cost a lot of money to produce and she has never charged a dime for any, we even pay for postage out of our own pockets. Michelle has sent packets to the college of physicians in each of the thirteen provinces of Canada and three formally acknowledged the information and thanked her. Perceptions of cannabis are being slowly changed one person, one doctor at a time. Michelle’s probation officer supports her efforts and the ironic thing is that she doesn’t have any legal trouble with her home country, but she is wanted by a country that has less than 5 percent of the world’s population, but 25% of the world’s prisoners behind bars. Barack Obama is the 44th president of the United States and he promised to put a halt to dispensary raids in the 14 states that support legal medicinal marijuana and now President Obama’s half brother, George, has been arrested and charged with possession of marijuana near his home in Nairobi, Kenya. Even though Barack doesn’t know George well and even though many presidents had brothers who did embarrassing things you got to take this as a sign to take notice of the pot situation in the world; is it time for a real change? (I’m not talking Billy Beer.)

I can only hope that the propaganda will die and that rational thinking will prevail in regards to cannabis. Michelle has a way with people, from the very old to the young and everyone in between, her patients and understanding never cease to amaze me. What was the first verse to that Mary Tyler Moore song, “Who can turn the world on with her song?” Something like that describes Michelle’s talents for turning people on to what is right and what is important but with a huge dose of compassion and understanding. Understanding is what we all need a massive infusion of, where is the understanding bailout? Everybody complains about their job, that their condo won’t sell or their hair isn’t what it used to be; from early-early morning to late at night and sometimes all-night-long, Michelle’s main Crohn’s symptom, diarrhea, keeps her shackled to the toilet sometimes for hours at a time and in all the time I have known her she has never complained once. Instead she helps others and takes good care of me and nurtures the relationships that make us what we are today, without her I’d be nothing and without me, Michelle would be a lonely warrior. She would still kick-ass and take names but I believe in Karma and wherever you are is where you are meant to be. Me, I’ll just keep writing and filming and taking good care of the medicine that takes good care of us, and I’ll be extra sure to take good care of the one who takes care of me, so she can continue to add to the list of over a hundred medicinal patients she has already helped to get signed.